Botkyrkabyggen is the largest housing company in Botkyrka that owns and manages about 10.700 residential units, providing a home to one third of the municipality population.

The residential tower blocks in Fittja were built as part of Sweden’s “million programme” in late 1960s/early 1970s and were scheduled for extensive renovation and improvement, but the owner possessed only part of the old and outdated paper drawings. The best, fastest and most efficient solution for this was the use of laser scanning in combination with the existing documentation.

The resulting point clouds were the basis for modelling, which Walter was assigned to do on behalf of SWG Nordic AB. The model was created in Revit, at SWG’s LOD 200, and included all the building elements and information, including rental information, rooms and SIS areas.

The floor plans and FM information was then extracted from the models and published in Client’s FM database, while the models themselves would be later used for planning and designing the future renovations.

On behalf of SWG Nordic AB. 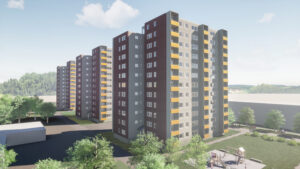